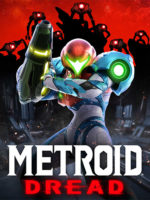 After the events of Metroid Fusion, Samus continues her story when she descends on planet ZDR to investigate an unknown transmission to the Galactic Federation. She is rescued by a living Chozo, a race that was once thought extinct. The remote planet has been overrun by evil alien lifeforms as well as chilling mechanical threats. Samus is now more capable and agile than ever. But can she defeat the inhuman threats lurking beneath ZDR?

The imposing E.M.M.M.I. was once DNA-extracting research devices. Samus is now being hunted. As you try to evade these E.M.M.I., tensions will rise. You must avoid a death sentence and find a way to get them down. Learn the truth about these robotic marvels and how you can escape with your life.

As you learn maneuvers and abilities, Samus will feel more powerful You will be able to leap over obstacles, maneuver through tight spaces, defeat enemies and fight your way through dangerous terrain. As you explore the diverse environments of ZDR, you’ll discover new and familiar skills. Use the Speed Booster or the Storm Missile to blast multiple targets. You can return to the area and use your new abilities for upgrades and alternate routes.